Look at the photos and say what the mother-tongue of the children is. Which foreign language do you want to learn and why? 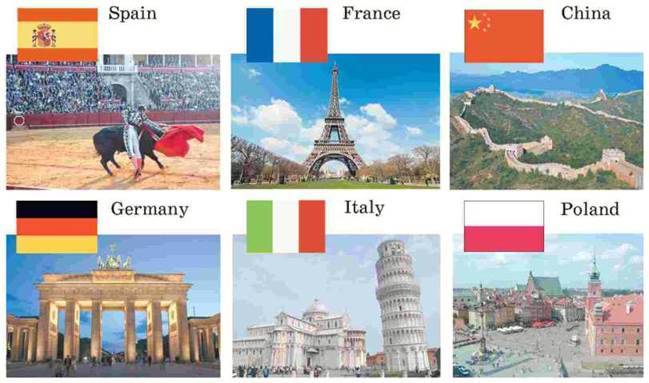 Example: In Spain people speak Spanish. I also want to learn Spanish because I want to go to Spain to see the bull fight.

Read and practise the sounds /w/ and /5/. Say what foreign languages you learn at school.

– What is your mother tongue, Roy?

– What is your mother tongue, Hans?

– What foreign languages do you learn at school?

– French and Spanish, Chinese and Japanese.

Example: A: May I take your dictionary?

A: May I work on the computer?

A: Must I translate the sentence?

A: May I answer the question?

A: Must I listen to the tape recorder?

A: May I switch on my computer?

B: …. Work with your neighbour.

A: Must I water the flowers?

2. Match the beginnings and the endings using a correct linking word (p. 82). Translate the sentences into Ukrainian.

I have been learning English for five years and I like it a lot. It’s not that easy… but I work hard. I want to improve my pronunciation… I listen to different English texts every day. I speak English fluently… I communicate with my friends at the lessons. We role-play the dialogues… helps us to develop our speaking skills. Recently I’ve joined our English-speaking club…. I hope to learn more our about the English-speaking countries and their culture. Many pupils of our class joined it… Mr. Black came from the USA and teaches English. I learn how to be creative.

1. Find the explanation of the following words and phrases and make

Up your own sentences with them.

2. Look at the pictures and say what the children do at their English lessons.

1. to master the English language;

4. to enlarge your vocabulary;

5. to learn more about the culture of English-speaking countries.

At home: Write what you like/dislike about your English lessons.

1. Read the story “Discovery Class” and answer the following questions.

2. What was special about the teacher?

3. What did the children discover in Discovery Class?

The letter came the week after Sam’s birthday. It was from the school and addressed to her parents.

“Very interesting,” said Sam’s mother as she read it.

“It seems they have chosen you to take part in the new gifted program”.

She read the letter. It said that after careful testing, a small group of children had been selected to participate in a program for the gifted

Called “Discover”. These children would meet twice a week with a specially trained teacher Sarah Hoople.

Miss Hoople was a small, smiling person. She wore large round glasses. But what Sam noticed most was that she was excited about things. As she talked, her eyes sparkled and her hands moved.

They started with a puzzle called “Can You Find the Treasure?” which had to do with an old man hiding a diamond ring in a half-ruined house. They should use logic to find it. Everyone called out ideas.

After they found the treasure, they went on to a word game. Miss Hoople called it “Reinventing Language”.

“Pretend you are a cave person,” she said. “And you are tired of pointing to things. You want to communicate with people. So you step out of your cave and look around. Up in the sky is a large bright object. What would you call it?”

“Good,” said Miss Hoople, writing it on the blackboard.

That, thought Sam, would really be something.

2. Fill in the right form of the word.

1. Imagine you are Sam. Tell your friends/parents about your Discovery Class. Begin with:

2. In pairs, speak about your English lessons. Use the pattern.

3. Describe the English lesson you liked most.

Write what you think of the statement “The more foreign languages you know, the easier it is for you to study”. Begin with: