Read and say what the capital cities of the following countries are:

Example: Madrid is the capital city of Spain.

Read the poem and practise: the sounds /æ/ and /ә:/. Say what capital city you are going to explore.

Let’s get on track

And take heavy rucktracks on our backs.

There’s lot of time to set and explore

And learn about countries more and more.

And take lots of pictures of the Queen and the crown.

There’s time for every kind of surprise.

Are you ready for summer travel, guys?1

1. Read and learn how to share information. Look at the pictures and fill in the mini-dialogues.

– They say… can take your breath away. 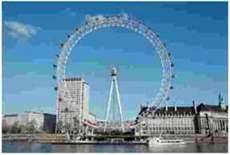 -It’s an open secret that… is the greatest attraction in Canberra.

– There is every reason for that.

– It’s a well-known fact that a… in Ottawa is amazing! 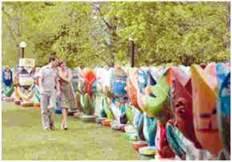 1. Read what guides tell tourists during their excursions in the capital cities and match them to the photos (p. 204-205). Say which of them you want to see and why.

Let’s stop at this picturesque place. It’s Griffin lake – a favourite place of those who live in Canberra. It’s good for canoeing and boating. You can also cruise round Lake Griffin on any weekday. The lake is extremely popular with kids. They have the time of their lives, swimming and sunbathing. Can such a rest leave anybody indifferent?

You are lucky to come to Canada in winter. I guess you adore sports and I’m dead sure skiing is your favourite one. So we won’t lose a chance and visit the Canadian ski museum. It’s a unique museum and it is worth seeing. I’m sure you’ll learn much interesting there. Let’s go then!

Ladies and gentlemen! Do you see that high, pencil-like obelisk of white marble over there? It is the Washington Monument, one of the tallest structures in the world, 555-feet tall, to be exact. You can get to the observation platform on its top by an elevator in 70 seconds, or by a stairway of 898 steps. Visitors can see the entire District of Columbia from its windows. If you happen to come there in spring you’ll see a picturesque cherry-tree festival. It’s really fantastic.

This ancient building is the genious unique creation of sir Christopher Wren. It is St. Paul’s Cathedral. You can climb up inside St. Paul’s dome and look down or visit the famous gallery that goes all the way round the inside of the dome. Don’t be surprised if people close the wall on the other side of the gallery – 32 meters away – can hear you talk. No wonder, it is called the Whispering Gallery, as even the quietest whisper can be heard dearly by everyone – no secrets here. 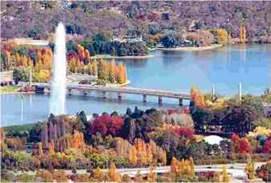 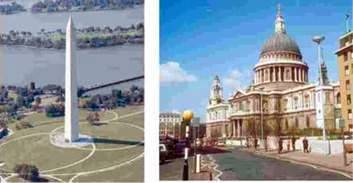 Example: As for me, I’d like to see the Canadian ski museum, because I’m fond of skiing.

2. Think of the words that can go with the words unique and picturesque. Make up your own sentences will them.

3. Many places of interest are closely connected with… .

At home: Find the information about the capital city you’d like to visit. Explain your choice.

Read in pairs. Say what the children know or don’t know about London.

Paul: I say, Lucy, have you heard the news about “London Quiz”?

Lucy: No. What about “London Quiz”?

Paul: Haven’t you heard? Everyone knows about it!

Lucy: Not me. Nobody tells me anything.

Paul: Then listen to me. London Quiz is a new quiz show on our local television. Televiewers have to answer twenty questions about London. The winner will get a chance to travel to London this summer.

Lucy: Oh, my! You shouldn’t lose your chance. You are Mr. Know-It-All

About London, as far as I can judge.

Paul: Do you really think so?

Lucy: Of course I do. I mean it, I really mean it. Let me examine you.

Lucy: My first question is about Big Ben: what is it?

Paul: Big Ben is the name of the clock bell, which rings every hour.

It is in the clock tower, in St. Stephen’s Tower, to be exact. I’m dead sure about it.

Lucy: So am I. So you have won the first score. Now, where can you find the statue of Peter Pan playing his pipe to the fairies?

Paul: In Kensington Gardens, of course. He’s also playing to the squirrels, birds and mice around him. I have just read a book by J. M. Barrie about Peter Pan who lives in a magic place called “Never Never Land”.

Lucy: So have I. He is the one who never grows up, isn’t he?

Paul: That’s right, that’s him. When I’m in London, I’ll certainly visit Kensington Gardens which is on the left bank of the river Thames, and then I’ll go to the right bank to have the view of a lifetime over London and the surrounding countryside. Guess where from.

Lucy: No idea. What do you mean?

Paul: It’s the London Eye, the largest observation wheel in the world.

From the top, you can see 36 Thames bridges!

Lucy: Unfortunately, I don’t know that much about London.

Paul: Frankly speaking, neither do I. Let’s do some Internet search together.

4. When did Paul get the first score in Lucy’s examination?

6. How many Thames bridges are there in London?

2. Read and fill on the web-diagram and say what Paul knows about London. 1. Act as Lucy and say how you examined Paul in London Quiz? Use: 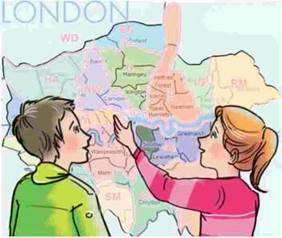 – to know much about something;

– to get a chance to do something;

– to win the first score;

– to have the view of a lifetime;

– to do the Internet search.

2. In pairs, talk with your friend about what you know or don’t know about London as in the pattern.

3. Be a guide of the capital city London and tell the tourists about it.

1. Listen to the talk about the capital city of the USA and say how its sights are connected with American history.

2. Listen again and correct the mistakes in the statements below.

1. There are many apple trees near the Jefferson Memorial.

2. There are 56 columns in the Lincoln memorial.

3. All American presidents except Lincoln, lived in the White House.

5. The White House is situated in Fifth Avenue.

6. There is a famous Cherry Blossom Festival in Washington in summer.

Plan a tour for your international friend around the capital cities.