1. Work in pairs. Choose one of the photos. Take turns to ask and answer the questions about it. Use the information given below.

A: Where is Madame Tussauds Museum?

B: It is in London. It is in Marylebone Road.

A: What exhibits can you see there? 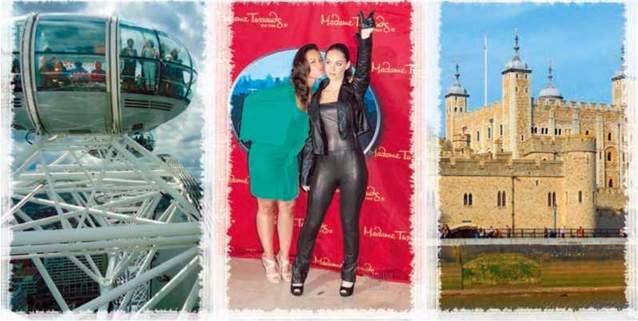 To be designed by the British architects, to have a ride, to see the picturesque view of London, to admire the city scape, to enjoy time with friends.

To see the figures of armoured kings, to see the Crown Jewels, to discover interesting stories about the past, to see the black ravens, to talk to a Beefeater.

2. Listen and read. Which fact about the Tower of London do you find the most interesting?

The Tower of London

In the past the Tower of London served as a royal palace, a fortress and a prison. Today it is a wonderful museum.

Black ravens meet tourists there. They have lived here for centuries. The Raven Master takes care of the ravens. He gives them meat in the morning and in the evening. The old legend says that if the ravens are lost or fly away, the Crown will fall and Britain with it.

3. Read and order the sentences according to the text of Ex. 2.

……. You can also see “Beefeaters” in their traditional Tudor uniforms.

……. Many kings lived in the Tower of London.

……. The Raven Master takes care of the black ravens.

……. Today the Tower of London is a wonderful museum.

4. Work in pairs. Ask and answer the questions to the missing parts of the sentences.

1. gives the black ravens meat in the morning and in the evening.

2. According to the legend……. will fall without ravens in it.

3. Today the Tower of London is a wonderful…. .

Grammar Lab: Comparisons with as… as/not as… as

When we want to say that two people or things are the same, we use as… as… . In negations we use not as… as.

5. Work in pairs. Look at the photos and talk about them.

Westminster Abbey is as popular among the tourists as St. Paul’s Cathedral.

Steve hasn’t taken as many photos of London as Alex.

6. Write the sentences as in the example. Use as… as or not as… as.