1. Listen and read the text. Make up the outline of its plot.

Winter is a wonderful season. On a bright winter day the nature is beautiful with trees covered by snow. We like winter for the snow and also for the best holidays of the year.

In winter when it is frosty most children like to play outdoors: they play snowball fights, make a snowman, sledge, skate and ski. But when the temperature is more than -10 *C (minus 10 degrees Celsius) and it is windy, it is then better to stay indoors. Then it is not only cold to play, it is freezing and the snow squeaks under your boots when you walk. It’s then better to put on warm clothes like a sweater, gloves and an anorak, and to wear winter boots on your feet.

The weather is also nasty at the end of winter when the snow melts and water is everywhere. There are streams and puddles of dirty water in the streets. Then we say it is a thaw. But we are not very upset because spring soon comes. 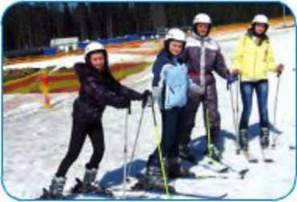 2. Listen and read the text. Then answer the questions.

Spring comes after winter. People say that the nature wakes up after the winter’s sleep, it refreshes to become even more beautiful than the previous year. The first flowers – the snowdrops – appear from under the snow and the buds appear on the trees.

In early spring it is generally cool. Then it becomes warmer, the sun shines, but it occasionally rains, often even thunders with lightning. The spring rains, especially in May, are warm and necessary for the future harvest.

The schoolchildren finish their school year in late spring and look forward to their best season – summer.

1. What season does spring come after?

2. What does the nature do in spring?

3. Is it generally cool in late or early spring?

4. How often does it rain in spring?

5. What season comes after spring?

3. Listen and read the text. Say whether the following sentences are true or false. Correct the false sentences.

Summer is probably the most popular season among schoolchildren. It’s the time for fun, entertainment and a good rest.

Most families try to go to the seaside to bathe and get suntanned, but some prefer to have their rest in the mountains and breathe fresh mountain air.

The weather is wonderful in summer in all parts of Ukraine. It is usually warm, sometimes hot. The sun warms the water in the sea, the rivers and lakes. If your family doesn’t go to the seaside you can bathe in the river or lake in your town or village. The average summer temperature is +25-27 °С. It seldom rains. If it rains, it is still warm outside in summer.

1. Summer is the most popular season among the parents.

2. Most families go to the mountains to bathe in the river and get suntanned.

3. When summer ends and the schoolchildren go to school they don’t look tired or ill.

4. In summer the water is warm in a lake or river.

5. Summer is the time for new impressions and entertainment.

6. The schoolchildren don’t like to say something about the time they spent during their summer holidays.

4. Listen and read the text. Answer the questions.

Autumn is another season, or as Americans call it – the fall. It is the time for the harvest. The fruit and vegetables are the tastiest in autumn. But it becomes colder and colder every autumn month. It is still warm in September, but it can even snow in late October. The leaves on the trees turn red and brown in October and then they fall in November. It often rains in autumn, sometimes it pours cats and dogs. The rain is usually cold and can last for several days. It is sometimes foggy in the mornings. The temperature is +5-10 °С.

The children don’t go out as often as in summer or winter, because it is wet and cloudy outside. But the nature is very beautiful in early autumn. People often call this season golden autumn. 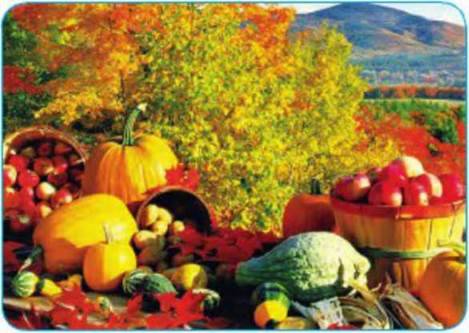 1. What is another name for autumn in the USA?

2. Can it snow in September?

4. Why don’t the children go out much in autumn?

5. Does it often rain in autumn?

6. What kind of rains are there in autumn?

5. Look at the pictures and say what you do in each season. There is a model to help you.

Model: In summer we often go to the forest to pick up berries because it’s warm in summer and berries are ripe. We also go to the seaside to swim in the sea, lie in the sun and get suntanned. 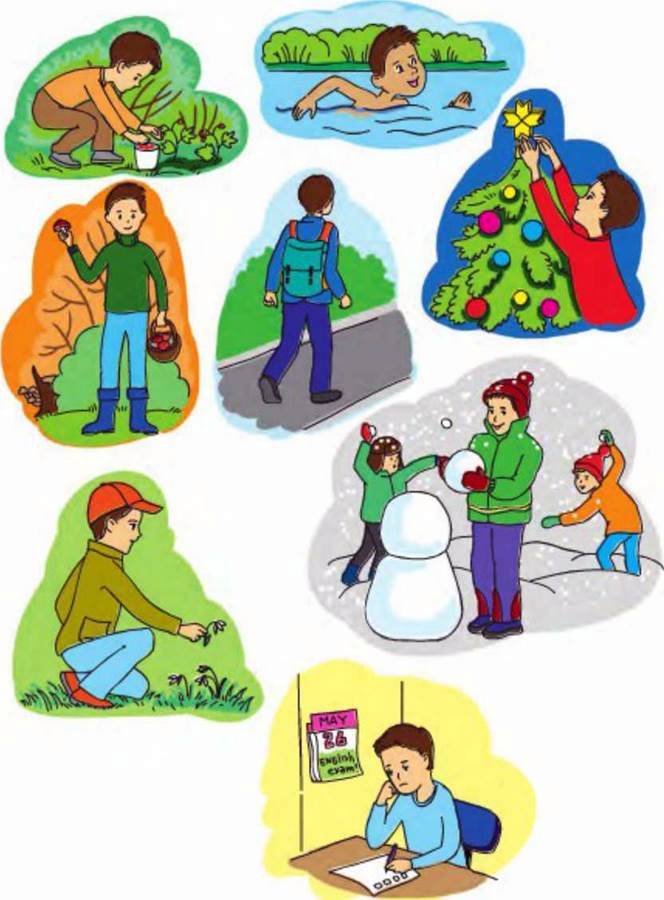